advertisement | who am I calling?
This entry was posted in Stories of Hope on February 25, 2020 by Baxter Ekern. 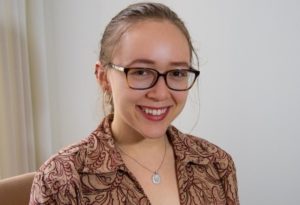 The first thing I noticed was the colors. The world, for so long a dull figment of my affinity for the dark and misunderstood, was forcing me to drink in its presence. And I did. At that point, it was my only hope. I drove to school in bewilderment. I was not concerned or thinking about any type of recovery.

I had spent the past three years convinced I saw the world sharper than ever, but two days of consistent carbs had changed my perspective entirely. The greenness of the leaves, the endless blue sky, the splashes of CSUF orange on the passing students. Spring and all of its earnestness. Cars’ engines roared invigoratingly, forcing me to confront the fact that life was all around me. It had never stopped.

After parking my car illegally and forcing another fist full of almonds down my throat, I was electrified. I burst out into the balmy air and headed towards campus with more energy than I’d been capable of in years.

I was a little early for class, so I decided to sit on a bench, force another snack (very restricted), and people-watch. The students were fascinating to me; I felt like I’d never noticed them before.

They were going about their complex, vibrant lives out loud and in public. They were eating and laughing and yelling and making plans for the weekend. Meanwhile, I was sitting on a bench fervently eating a browning apple.

I became aware of how “other” I was. I’d known all along, but this time I didn’t feel special for it. It hit me that I wasn’t always so foreign to everyday life. I never thought it would be something I would have to grasp at understanding again, but suddenly I was willing to try.

The first time I admitted that I was anorexic was to myself, in the privacy of my bedroom. My mother and other concerned parties had approached me on the subject countless times over the past few years, but I had always laughed it off.

Of course, I wasn’t anorexic! If I was, how would I have the energy to work out five hours a day? Although my meals were severely restricted, the fact that I still had three a day felt like proof that I was “just fine.” I had no knowledge of eating disorders and the many different shapes and sizes they come in, or that I suffered from both anorexia and crippling exercise addiction.

While scrolling through food Instagrams, a nightly ritual to help satiate my hunger (nonsensical, I know), I stumbled across a profile that caught my eye. It was filled with pictures of unorthodox meals that looked dangerously close to my everyday fare–not exactly on par with an experienced food blogger. After taking a closer look at the bio and captions, I realized this was the profile of someone in anorexia recovery. A sort of food diary for her to vent and hold herself accountable.

I tore through her captions, hungry for information. It struck me that I related to almost everything she had to say; I felt like it was something I’d written. But it was another six months of self-abuse before severe heart palpitations drove me to Urgent Care and forced me to face the truth: I couldn’t keep doing this for the rest of my life.

Growing up in a family with a history of vices, the word “recovery” for me was always synonymous with alcoholism or drug addiction. I figured I had done everything to avoid that fate for myself: I worked full time and kept a tight schedule. I was a senior in undergrad about to earn my degree. I didn’t get in trouble, and I didn’t make mistakes. I was a golden child, above the chains of mortality.

The first thing I felt when I realized I was in desperate need of recovery was a burning shame. As I’m sure you’ve gathered by now, I spent most of my life aiming for perfection, and this was raw, ugly. I’d never heard of anyone recovering from an eating disorder before, and it was something I had no idea how to navigate.

I was utterly aware of how common relapse was, according to the online community. Feeling unable to trust myself and desperate to get better, I made the decision to go public about my eating disorder.

Everyone’s approach to recovery is different. I chose to do it on my own. I knew myself: much too stubborn to listen to anyone, and going inpatient somewhere would only result in relapse.

However, I also knew I couldn’t fully trust myself to make the right decisions for my recovery, so I compromised by seeing a therapist. I also made the irrevocable decision to go public about my struggles. I was embarrassed to be so vulnerable, but I was terrified of myself and knew it would hold me accountable in the future if I ever started to slip.

I was wrong on both accounts. Any embarrassment I was feeling came and went within the first minute of posting the photos, and then the comments started to flood in. Childhood friends, family members, acquaintances, and strangers alike were voicing their support and lauding me for my bravery.

From then on, I wouldn’t merely be held accountable. I would be constantly reminded of my resilience, overwhelmed by the amount of love in my life and, most importantly, confided in by others who felt heard for the first time–much like I had so many months before.

Recovery is the most difficult thing I’ve ever had to overcome. It forced me to give in to desire. People who adopt eating disorders don’t just do so to become skinny–we want control. No, we need control. And above all else, we need to not need. We’re after independence, success, power, and we believe the only way we can do this is by restricting. The world is not going to hold us back ever again–we already have that covered.

Admitting to my hunger was the ultimate disgrace, especially because my body was craving so much. Several years of toying with my health came back to bite me. My body didn’t trust me anymore, and so it held onto every ounce I fed it with avid desperation. After three years without one, my period came back. Every 2-3 weeks, for the first year. The hormones were raging even harder than they had the first time around at age 12. I felt like I couldn’t keep my head on straight.

My memory was shit. My brain felt scrambled at best and damaged at worst. My appetite was fucking insatiable, for months and months and months on end. I was sweaty, tired, hungry, thirsty, confused, exhausted, terrified, embarrassed, and proud of myself on a daily basis. It was difficult to focus on a single task. I couldn’t watch a heartfelt scene on TV without bursting into tears.

My moods transformed within minutes. These symptoms, among several others, persisted for over two years. The only thing that kept me going was the fact that, although nothing was easy, it was getting the tiniest bit easier day by day. I felt like it was too late to go back, so I forged on.

I began to challenge myself, taking myself out to lunches and dinners, and facing the menu with determination. I devoured greasy food with coworkers, going back for seconds. My roommates and I made giant meals together; eating with them eased the pain of the action.

I started to feel normal again. Eating became a bonding experience–a beautiful tradition, the world’s language. I put away six pieces of toast at a time, convincing myself I was nourishing with every bite. I figured things couldn’t get any worse, so I might as well do my best.

Research (and my therapist at the time) dictates that it typically takes as long as you were suffering to recover. March 4, 2020, marks the third anniversary of my decision to recover and signals my arrival at “full recovery,” which has me reflecting on my journey.

I wanted to relapse so many times. I never want to understate that fact, or the general agony of recovery. I felt like a petulant child most days, incapable of interacting with the world. Socially, I had to start over. I had to learn again how to be a friend, a sister, a daughter, a lover. But I’m at the other end of the tunnel, and I can confidently say that every single day, every pound, every fear faced was worth it.

Today, in recovery, I dance. It was something I always loved to do while growing up–something that makes me feel beautiful and balanced and free. I’ve found my way back, after all these years.

I dance, and I laugh, and I eat. I moved to New York to write–something I’ve dreamed of since I was a little girl. Life doesn’t feel like constant pressure anymore; I am enough. I have the love of my friends who have always stood by my side, as well as those I’ve picked up along the way. I have fun. I had no idea how much I was missing out on.

It’s impossible to pinpoint an exact starting point or direct cause for my eating disorder. But at the end of each reason is a thread: fear. I was so sure of myself and so terrified I’d fail in every way possible.

I thought I could cut out the bits and pieces of life that I didn’t like. I thought hardening myself would make things easier to face. But it was practicing openness that gave me the balls to truly save myself, and be a better friend to those around me.

There are times I miss the sense of comfort my eating disorder provided me with. I equated having everything entirely under control with being unstoppable. I figured it was the only way to succeed. But life is so much better in color.

I don’t think I’m done recovering. Or, maybe I am, but I’m definitely not done learning. I’m not done trying to become a better person, and I’m not done giving more love to myself than I did yesterday. I’ve gutted my demons one by one. Do not resuscitate.