Anxiety Disorders are some of the most common mental health disorders to co-occur with eating disorders. The National Institute of Mental Health estimates that approximately 47.9& of those with Anorexia Nervosa, 80.6% of those with Bulimia Nervosa, and 65.1% of those with BED also struggle with an anxiety disorder diagnosis such as Generalized Anxiety Disorder (GAD), Panic Disorder, Phobias, and Separation Anxiety [1]. Research overwhelmingly indicates that any co-occurring mental health diagnosis must be treated alongside the eating disorder simultaneously, therefore, understanding the relationship between eating disorders and anxiety disorders is of crucial importance.

What is Anxiety Disorder?

Anxiety Disorders are a category of mental health diagnoses whose criteria for identification are designated in the Fifth Edition of the Diagnostic & Statistical Manual of Mental Illness (DSM-5). The DSM-5 describes these as “disorders that share features of excessive fear and anxiety and related behavioral disturbances [2].” When most people refer to “anxiety disorder,” they do not realize they are referring to a larger category and, instead, are focusing on the most prominent of anxiety disorder diagnoses – Generalized Anxiety Disorder (GAD). 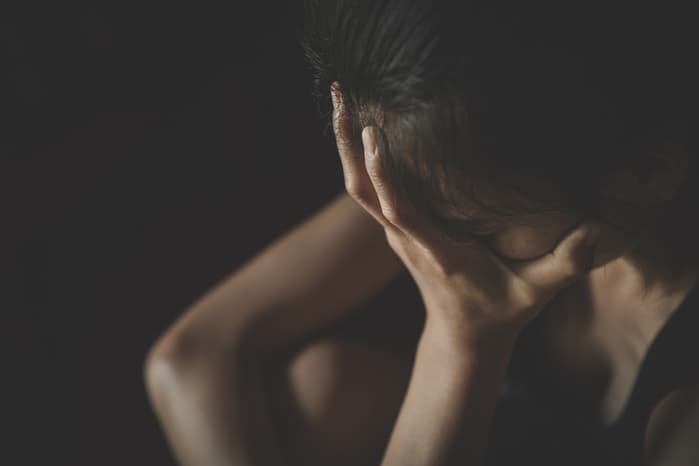 Generalized Anxiety Disorder impacts approximately 2.9% of adults and .9% of adolescents in the United States [2]. Signs that you or a loved one are struggling with an anxiety disorder may include:

While GAD may be observed alongside all eating disorder diagnoses, the way in which it presents or co-occurs may differ.

Anorexia and anxiety often co-occur due to having similar clinical factors such as a hyperfixation on perfectionism, rigidity in daily living, and meticulousness. While either can precede the other, it is most common for anxiety to precede anorexia nervosa symptoms, as anorexia exists around anxiety and worry related to food, the body, exercise, etc. Treating anorexia often involves identifying how anxiety intersects with eating disorder behaviors and how to combat both.

Of all eating disorder diagnoses, GAD symptoms co-occur with bulimia the most, with 80.6% of individuals struggling with both [1]. The relationship with bulimia and anxiety is even more complex, as bulimia precedes anxiety about as often as anxiety precedes bulimia symptoms. Individuals with anxiety over food, the body, worth, calories, etc. may engage in bulimic symptoms as a method of controlling or coping with these aspects. However, individuals with bulimic symptoms might also develop excessive worry or concern over these aspects as a result of bulimic behaviors. Anxiety can also appear as a result of malnourishment, which occurs in both anorexia and bulimia nervosa. Individuals might also develop worry over the behaviors themselves, as they engage in deceptive behaviors to hide or maintain their disorder.

BED is often associated with anxiety in relation to maladaptive coping through eating past fullness or using excessive food consumption to cope [3]. Traits that can increase risk for both anxiety as well as binge eating include perfectionism, emotional dysregulation, avoidance, mood intolerance, low self-esteem, and/or interpersonal difficulties [3].

GAD is a concerning disorder on its own, with research indicating that, without treatment, long-term effects of anxiety can greatly impact one’s daily life. The Anxiety and Depression Association of America (ADAA) reports the following regarding impacts and facts about anxiety:

There are numerous methods of treating both anxiety disorders and eating disorders. Treatments often involve utilization of psychiatric medications, undergoing therapy, or, preferably, doing both simultaneously. Research indicates that the latter, wherein one takes psychiatric medications as well as undergoing mental health therapy, is the most effective treatment model. The efficacy of these treatments, whether utilized alone or combined, depend greatly on the participation and motivation of the individual.

Psychiatric medication is something people often have trepidation about, however, it’s efficacy in treating anxiety disorders is well-supported in research. As the ADAA details, “medication may be a short-term or long-term treatment option, depending on severity of symptoms, other medical conditions, and other individual circumstances [5].” Common medication classes used to treat anxiety include Selective Serotonin Reuptake Inhibitors (SSRIs), Serotonin Norepinephrine Reuptake Inhibitors (SNRIs), and Benzodiazepines [5]. Finding the medication that supports you in overcoming your anxiety might take time and you should give yourself permission to ask your trusted medical professional any questions you may have.

Therapy supports both anxiety treatment as well as eating disorder treatment and is proven effective for both. In fact, the most effective treatment is the same for both disorders. This treatment is known as Cognitive Behavioral Therapy and is the most evidence-based treatment for almost all mental illnesses. Exposure therapies, Acceptance and Commitment Therapy (ACT), and Dialectical Behavior Therapy (DBT) are also therapeutic treatments known to be effective in treating both disorders. Mental health treatments that involve recognition of limiting, fear-based, and negative cognitive beliefs are particularly helpful in overcoming both types of disorders.

Whether you are just beginning your treatment journey or moving from treatment to outpatient support, recognize that engaging with a team that understands and can treat both disorders is most likely to help you in achieving long-term eating disorder and anxiety recovery.