Dieting may not be the cause of eating disorders, but it is often a precursor. The National Eating Disorders Association reports that 35% of “normal dieters” progress to pathological dieting and that 20-25% of those individuals develop eating disorders.

It is far too common that eating disorders start off as dieting. Dieting can be a way for individuals to exercise control, counting calories and fat grams, limiting types and amounts of food, and watching the numbers drop on the scale.

Dieting as a Cultural Norm

Dieting has become common and normalized in our society. So much so, that children ages nine to eleven are dieting at alarming rates.  A study published in the Journal of American Dietetic Association in 1992 found that 46% of nine to eleven-year-olds are “sometimes” or “very often” on diets and that 82% of their families are “sometimes” or “very often” on diets. It would not be surprising if the rates have increased over the years, especially since that has been the trend of the dieting industry.

This trend for dieting and being “thin” is a relatively new phenomenon in the course of history. Less than one hundred years ago Americans strived for “excess” body fat. They viewed fatness as a sign of success, health, and beauty. There were even articles in magazines like Harpers Bazar with advice on how to put on extra pounds. At this time physicians were even encouraging Americans to gain weight, and they believed that a “balanced personality” was obtained by having a large number of fat cells.

Our culture has brainwashed us into thinking being ultra-thin is equated with beauty. To obtain this body image, Americans put so much time, energy and money into diets, and in the end the diets don’t even work. The dieting failure rate helps to explain the industry’s rapid growth.

When a diet fails, the search is on for a new one that “really works.” Ninety-five percent of dieters regain their lost weight. Plus, many of those who have “failed” put on additional weight within one to five years. The 5% of “successful dieters” are usually successful because they have actually adopted a new lifestyle, not because they have stuck to their diets.

Most people blame themselves and their lack of willpower for their diet failures. In reality, it has nothing to do with willpower. Diet failure can be attributed to the body responding to hunger and the body’s state of semi-starvation or starvation. The body and mind react to a diet in the same way they would to starvation.

In starvation, the body’s metabolism decreases, and cravings increase. This is the set up for diet failure. Metabolism naturally slowing down during starvation is the body’s attempt to conserve energy. A decrease in metabolism means the body is burning calories at a slower rate.

Also while on a diet, the mind becomes preoccupied with thoughts of food and cravings intensify, especially for foods that will provide quick energy, like sweets. Eventually, it is too difficult to fight nature. People can’t remain on diets forever and when dieters terminate their diet efforts, it is common for overeating to ensue.

Overeating and even “normal eating” with a suppressed metabolism will cause the weight that was lost to come back. The failure rate of dieting (95%) is so high, not because people aren’t good enough or strong enough but because our bodies were designed to fight weight loss.

Intuitive eating teaches individuals how to look inside themselves and listen to internal cues. It also provides guidance on how to form a healthy relationship with food. It is an anti-diet approach to eating. There are no rules to break and no temptations to resist. Intuitive eating, unlike dieting and meal planning, is not a set up for failure. 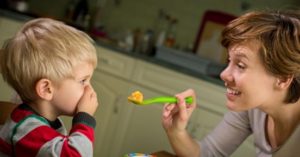 To get back to a healthy and natural relationship with food, it is important to remember that infants and toddlers innately possess this ability. Infants easily know when they are hungry and full. Doctors guide new mothers to respect their infant’s inner wisdom.

They instruct moms to never force-feed an infant. It is amazing that infants intuitively know that they need more food right before a growth spurt and will naturally crave increased feedings. Toddlers are the same.

A study done by Leann Birch, Ph. D. showed that children ages two to five were eating, on average, the same amount of calories daily for a week, even though the calories from their individual meals varied greatly. This study shows that toddlers don’t need to count calories to get the appropriate amount of energy; they naturally know what they need.

The ability to use the internal cues (hunger and fullness sensations and cravings) to regulate food intake is present in everyone. This is true no matter how long the individual has been ignoring them. The challenge in becoming an intuitive eater is to reconnect with the already present internal cues and to learn to ignore the external ones.

Dieting is a purely external way to regulate food intake. Other things that control food intake, which are external, are only choosing “good” or “healthy” foods, automatically finishing everything on the plate, and taking the portion that is listed on the food label. Using external factors to determine what, how much and when to eat is a dangerous path because it disconnects us from our bodies and our intuition.

Fears Regarding Listening to Our Bodies

Most people initially believe that by using internal cues to guide food amounts and food choices, they will inevitably be “unhealthy,” make the wrong choices, and eat too much. This is a sign of a lack of self-trust, which is natural when external factors have been used for so long to make these choices for us. Regaining trust is a process. It takes time and practice, but it is well worth it. By using internal cues it is possible to never diet again!

When people start eliminating all the old, external rules and controls, it is normal to crave foods that were once restricted. For example, when individuals go on low-carbohydrate diets, usually that is the nutrient they start to think about and crave. After stopping the diet it is quite common to “over-indulge” in foods high in carbohydrates. This is because the body is craving them so intensely.

It is the same with any food. The more and longer a food is restricted, the more intense the cravings will be. This can be especially scary for individuals with eating disorders. At first, it may make them feel out of control and like they cannot be trusted with food. But eventually the extreme cravings subside and return to “normal.” It is important for them to keep this in mind as they are going through the process of becoming an intuitive eater.

Listening to the Body and Weight

By listening to hunger and fullness cues and to what the body is craving, our body will naturally find a weight where it feels comfortable. This is known as the body’s set-point weight. An easy way to understand this concept is with an analogy. A thermostat is set at 70 degrees. When the room drops below that temperature, heat will blow out of the vent and warm the room. If the temperature in the room goes above 70 degrees the air conditioner will blow cool air. Metabolism and hunger operate in a very similar way.

Hunger and fullness cues and metabolism play a role in the regulation of our body’s weight, just as the heating and cooling of the room helps control the temperature where the thermostat is set. When weight drops below our set-point, hunger will increase and metabolism will lower to conserve energy. When our weight goes above our set-point, hunger decreases and metabolism increases to burn energy more easily. Getting in tune with one’s body is one of the important skills gained in treatments for an eating disorder.

Being Mindful while Eating 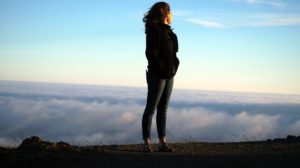 In our modern-day lives, many of us are rushing around and eating food on the run. Eating in this manner, most individuals do not pay attention to hunger and fullness cues, let alone the taste, texture, sight, and smell of their food.

Staying fully aware of these aspects of food will enhance the experience of eating, and more enjoyment and satisfaction will be derived.

Checking in during various times throughout the meal can also help us to be mindful while eating. Ask questions like: