Kate had everything going for her. She was a cheerleader on the university cheer squad, had a boyfriend on the top-ranked football team, was excelling in school, and had the respect of those around her. But Kate felt miserable, as though she was juggling the many aspects of her life and that, at any moment, she’d drop a ball and everything would come crashing down around her.

What people didn’t see was Kate’s obsessiveness with food, exercise, and body image concerns. Kate was hard on herself and pushed herself to the limits, whether it be with academic achievement, success in sport, or an unrelenting social calendar.

A Vicious Cycle of Highs and Lows

Kate was trapped in the cycle of an eating disorder. Specifically, she struggled with bulimia and would swing between periods of dietary restriction, wherein she would cut out “bad” foods, eat “clean,” and try to be the picture of the perfect athlete, and periods of feeling out of control emotionally and behaviorally, including binge eating, self-induced vomiting, and lack of self-care.

Kate felt great shame about the extremes she experienced, and yet she felt caught in a trap of disordered eating, fear about changes in her body, and pressure to perform as an athlete.

Athletes Are At Higher Risk of Having an Eating Disorder

It can often be difficult to spot eating concerns among athletes as a sport environment can mask some of the signs of eating concerns. For instance, in the world of sport it is the norm to engage in challenging, intensive, and long training sessions. For someone who uses exercise as a form of purging, emotional control, and weight loss, the behavior is accepted as what is required to be an excellent athlete and athletes are praised for their commitment to training. 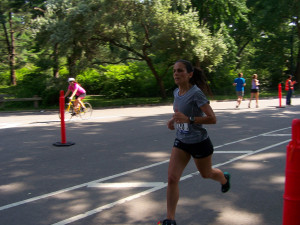 Likewise, when it comes to dietary intake, eating concerns can often be hidden under the guises of eating “clean,” eliminating “junk” food, and fueling for performance. Behind this front what may actually be happening is that athletes are developing chaotic eating patterns and destructive behaviors to compensate.

While athletes who struggle with anorexia may come to the attention of coaching and training staff due to low weight and injuries secondary to low weight, often those with bulimia and binge eating disorder may go undetected for longer periods of time due to being of normal weight. It is important to remember, however, that even at a “normal” weight, there are considerable health concerns that must be addressed.

Sometimes even the athletes themselves don’t understand the significance of their concerns because they are in a “normal” weight range.

Signs & Symptoms of Bulimia In Athletes

Despite being difficult to identify, there are signs and symptoms of bulimia in athletes.

Physical and/or medical symptoms include:

Psychological and/or behavioral symptoms of bulimia include:

As mentioned, it is typically the norm for athletes to participate in rigorous training sessions as part of their sport.

However, even in competitive athletes, there are signs and symptoms of unbalanced or unhealthy exercise, such as:

The Female Athlete Triad is an additional concern among athletes with eating concerns. The Triad, which consists of disordered eating, amenorrhea or menstrual changes, and osteoporosis or loss of bone density, is a significant health concern among female athletes.

It is important that athletes who may be experiencing eating concerns consult with their medical provider, coaches, and training staff in order to address the very real concerns that accompany eating concerns among athletes.

Kate, like many athletes, felt confused by her experience. On the one hand, she was a competitive athlete who focused on a healthy lifestyle, and yet many of her behaviors did not support health. Even though she was embarrassed and ashamed, Kate sought out the support of her coach and training staff.

They encouraged her to seek professional help for the eating disorder by working with a therapist, dietitian, and medical providers with eating disorder expertise. As Kate reached out for support, she learned that there was no need for her to juggle all the balls in her life on her own, and she found meaningful help for her concerns.

She also found a way to continue participating in her sport in a healthy, balanced way, and discovered that in addition to her sport team, she had a strong support team to help her in recovery.

How to Help an Athlete with Bulimia

Early identification and intervention result in fewer and less severe complications, less resistance to treatment, and faster, easier, and more positive treatment outcomes. Here are steps you can take to help an athlete with bulimia: